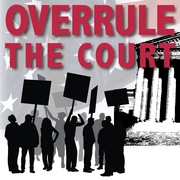 Move to Amend is a broad national coalition of grassroots groups and national organizations that are asserting a bold call to amend the Constitution to restore the power of people over corporations.

As a founding and core member of the Move to Amend Coalition, Democracy Unlimited served as the fiscal sponsor of Move to Amend from 2012-2014. We provided office space, staff, and much of the leadership to Move to Amend.

Since the Supreme Court's January 2010 ruling on Citizens United v FEC, several different groups have amassed to challenge the decision. Move to Amend is the only group taking a broad, grassroots, movement-building approach. And we are the only group that has done the work to ensure that we are multi-racial, geographically and ethnically diverse, and gender-balanced in our leadership.

At Democracy Unlimited we believe it is time we confront the entire current Constitutional framework that puts the "rights" of property above the rights of people. It's time to make the promise of democracy a reality. We also see this moment as an opportunity to continue building a grassroots movement to assert democratic local control over corporations.

★ To sign the petition of support for the Constitutional amendment, or to learn more, check out the campaign website.

★ For current news about Move to Amend, visit their Announcements page.

★ Click here to donate to the Move to Amend Education Fund.