May I Ask You Who Your Heroes Are? Op-Ed by Maureen Kane.

(Thanks to Maureen for writing this lovely op-ed, and our interns and volunteers who organized our tax day action on 4/15. Great job everyone!)

My heroes tend to be those persons who have been willing to speak truth to the ruling elite. Many of whom have been imprisoned and/or assassinated for doing so. Such as:…

4/22 Wake Up For Freedom, Stay For Liberation

Join the DUHC Club at HSU as they propose a historic resolution to the Board of Associate Students.

Let's show them some solidarity they can't say no too. Let's tell them that corporations are NOT people and they do NOT deserve the same rights and privileges as people.

People have hearts, minds, morals, life-spans and a conscience. Corporations live for the sole purpose of maximizing profits.

The second meeting for the Community Garden Campaign will be this Wednesday, April 20, from 5:30 to 7pm at 1424 D Street in Eureka. We will be discussing our next steps as a campaign, and would love to have your input!  Below is a
description of the campaign thus far...

The garden campaign is an evolving, growing and non-static effort that seeks to bring together the many varied and diverse community garden spaces together to build solidarity among them and to find solutions to… Continue 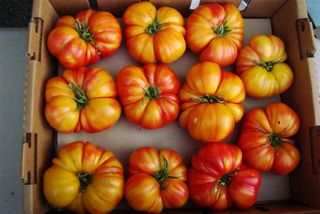 A message from our friends at the Bill of Rights Defense Committee:

It’s been too long since those of us who care about civil rights and civil liberties saw Congress take seriously its oath to defend the Constitution.  But we have a chance this month.  The PATRIOT Act, which was recently extended through May, will be up for debate again before the end of May. I’m writing now to encourage you to…

The California State University system is facing a billion dollar budget cut.
500 million is already slated to be cut with an additional 500 million on the table.

Protest these cuts on Wednesday, April 13th at noon in front of the HSU library!

4/4/11 - WE ARE ONE: Labor Solidarity Rally and Community Event

On April 4, 1968 Dr. Martin Luther King Jr. was killed while defending public sanitation workers in Memphis who were fighting for their dignity and the right to collective bargaining. Today, workers across the…

Humboldt Plan It Green’s annual conference series is called Building Green Communities. It is always free and open to the public.

The conference features an Expo/Tradeshow, a series of… 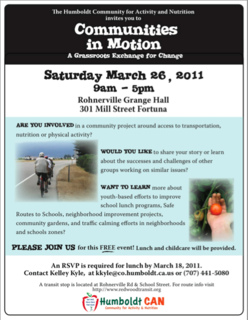 COMMUNITIES IN MOTION: A Grassroots Exchange for Change

Guest Nick Jiles is a union organizer with the California United Homecare Workers. He contextualizes the recent attacks on working people orchestrated by Republican lawmakers in Wisconsin and across the… 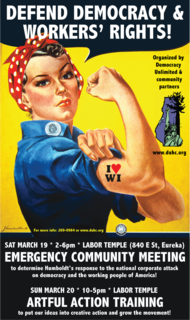 Protests and rallies are being held across the country in response to recent corporate-sponsored attacks on democracy and working people in Madison, WI and across the nation. Austerity measures and anti-worker legislation is currently being…

Climate activist Tim DeChristopher, who was put on trial in Salt Lake City, Utah, this week for his interference with an oil and gas auction held at the end of the Bush administration, on Thursday was found guilty by a jury. He faces a sentence of up to 10 years, to be determined by a…

*We need to decide on a regular meeting time asap, check your schedule!

Kaitlin's guests this week will be Kaja Rebane a union member and community organizer from Madison, WI. Kaja will give listeners an update about what's been happening in Madison over the last week, and where the… 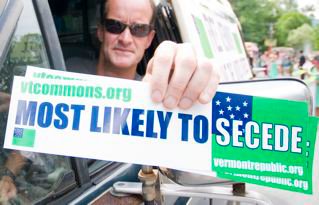 Deadline for summer applications is March 7, 2011.

Administrative Assistant
12-15 hours per week, $10 per hour, some evenings & weekends

Are you passionate about working for social justice? Join our team!

Democracy Unlimited is currently seeking an extremely well-organized and detail-oriented individual to support all of our administrative functions.